As we reflect on the Football Marathons of 2019 we congratulate three first time winners, witness the highest EVER total raised by one team which also helped us record our highest ever total for the same event, we also pine over the physios and can say Clinton Morrison hasn’t lost his touch!

Whether you are a donor, volunteer or a player you have all played a huge part this year and we want to thank you for helping us raise an epic £205,000 over our 3 events in Jersey, London and Brighton. 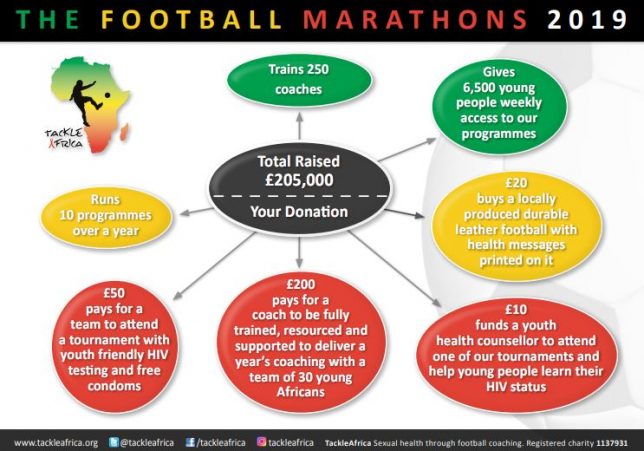 What you have funded

As you know, we use football as a tool to educate young people in Africa about HIV, sexual health and sexual rights and we have found that it has a huge impact on those people we reach (20,000 this year). It has taken us 20 years to come this far and year after year we refine our skills, increase our knowledge and leave a bigger footprint – without your help we could not do this!

It began in Jersey on a particularly windy 8th June where we raised an impressive £18,000, split between 11 teams. Fatzio raised the most with a stunning £2,608 , so big shout out to them and especially to their captain John Gamble. The final was contested between Kante Willian and In De Gea with Kante Willian lifting the trophy on penalties.

Kew Park Rangers beat 2-1 S Club 8 in a hotly contested final – after winning 16 drawing 2 and losing just 2 matches all day. 2030 goals were scored over an incredible 626 games – Clinton Morrison turned out for Va Va Voom for a few hours as the top fundraising prize and demonstrated that the most effective way to hold up the ball is to get your backside into the mix! His touch was unreal but we are not sure if he could have lasted the whole 12 hours!

Clinton Morrison with the TackleAfrica team.

Finally over to Brighton in what was perhaps the windiest day in UK history – we didn’t lose any humans, fortunately, but a total of 11 Gazebos and 1 huge marquee did meet their match! Wind aside, everyone who took part had a wonderful day as the skies cleared just after midday to ensure the 248 players finished the day in style. The final was a repeat of last year as Pique Blinders were looking to get revenge against Ain’t no kooler than Koulibaly and justice (after last year’s controversies) was served as Pique Blinders won on penalties. Most importantly, we smashed two records as we raised the highest ever amount for our Brighton event: £74,000, and the amazing Le Saux Solid Crew and captain Russel Reed raised a breathtaking £8,860!!!!!!!

An epic year, with lots of memories made, so we want to thank everyone who helped out with our events from Jersey to Brighton – the Councils, security, committees, medical teams, all the volunteers, videographers and the glorious, glorious physios and masseurs who made the day so much easier.

Also we want to pay tribute to our sponsors across the three events, so raise your glasses to: C5 Alliance, Hinds Decorators and More, Praxis IFM, 304, Footy Addicts, Matchbook and Groundsure.

Finally we must not forget the role that 102 people in particular played this year, the most important role that anyone plays – they bring teams, organise teams, organise fundraising – for some it’s relatively easy, for others this can be hard work – we want you to know how much your work means to us – you are the most vital cog in the Football Marathon Machine, therefore a special mention to the Football Marathon Captains of 2019: