A lot has changed in the past couple of years and this summer we were able to get back to “normal” and even expand our Football Marathons. As we look back on this year’s event, we must first and foremost thank all our supporters – those who participated, those who volunteered, those who donated, everyone. It was a busy and packed summer schedule and we cannot be more pleased with the result: £192k raised.

Generation Press smashed the highest fundraising total (for a second year in a row) by £2k raising a massive £12,145. We saw an incredible record breaking total for the London FM too raised by John Minshull Invitational £7,855. We launched The Bristol Football Marathon, a brand-new event, which exceeded expectations, raising over £17,000. We celebrated three first-time winners, whilst the other two teams improbably retained their title. 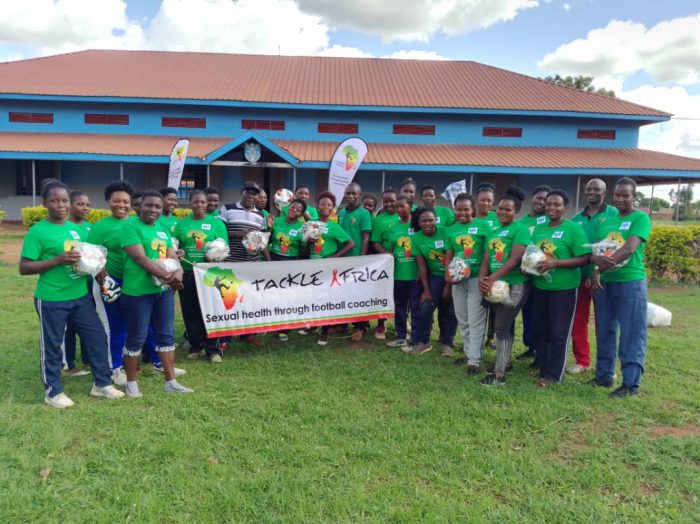 Our female coaches at HONECRIC in Hoima, Uganda – All the money raised helps fund programmes like this one

Once again we were delighted to have African Advocacy delivering HIV testing at our event in London, 25 players were tested during the event. We were able to raise SRHR awareness and demonstrate how our programmes are run across Sub Saharan Africa.

Your funding and our programmes 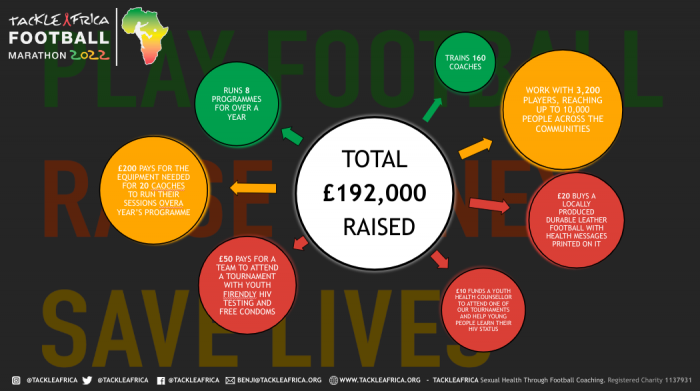 The London Football Marathon took place on the 18th of June during a heatwave – however, the players were lucky enough to get a bit of rain as we headed into the knockout stages! An amazing £86,600 was raised by 32 teams. John Minshull Invitational, captained by Luke Sheperdson, raised the most with an incredible £7,855 which saw him play with Clinton Morrison who made his 6th appearance at The Football Marathon. The average fundraising per person impressively this year and it is a great testament to all of our players, supporters and funders. Also a big thank you to all the organisations who helped with matched funding, including Salesforce, Google, HSBC and Santander to name a few,

Murder on Zidane’s Floor, led by Jordan Walser, won 2-1 in the final against Bladdy Love Soccer, John Sewell’s team. In total, there were 1,139 goals scored (1.5 per game) and 881 points won across 12 incredible hours!

Two weeks later it was Brighton’s turn – Celebrating it’s 10th anniversary and with the help of 32 teams and a total of 256 players we managed to raise over £65,000. Once again, Generation Press (captained by George Warren) raised the most and beat their own record from last year with £12,145. In the final, Paris Ganjaman, (lead by James Hubbard) beat Ronaldinho’s Army 3-2 in a thrilling final. Overall, each player took part in 380 minutes of football and contributed to a total of 1318 goals scored.

Our third Football Marathon took place in Jersey two weeks later and another 10th birthday to celebrate. A new venue provided a picturesque backdrop for our latest event on our favourite Channel Island. 11 teams took part in raising £17,000 and scoring (as well as conceding) 615 goals!

Nontes for Africa, led by James Beaumont, played Cameroon Diaz, led by Glenn Le Moignan, in the final and won 3-1 to retain their title from 2021. Three teams raised over £2,000 for this year’s event; Fatzio (John Gamble), Cameroon Diaz, and Sam Dustow’s team. 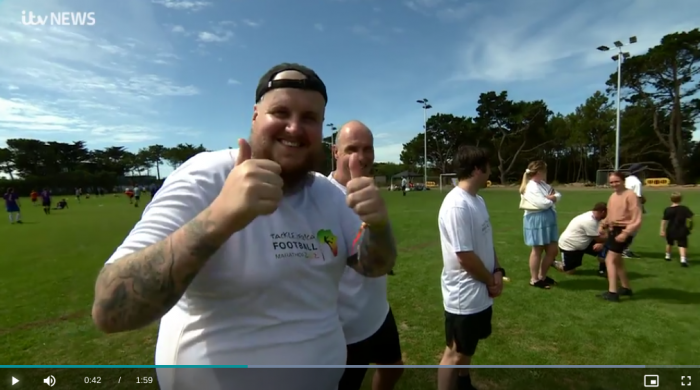 Adding a new Football Marathon to our growing list of locations, we held our very first Bristol Football Marathon on the 6th of August. 7 teams took part and raised a massive £16,741, outdoing a record set last year, by our Oxford FM, for the most raised by a new event. Whoops Reunited finished as the highest fundraisers raising over £3,500 for TackleAfrica, Mark Gardener their captain runs his own fundraising golf event which helps to fund his FM team. Above and beyond from Mark and our hero of 2022! 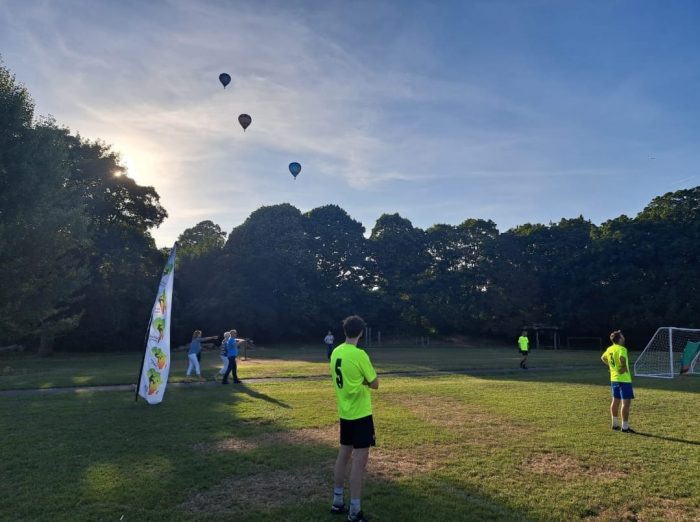 Sporting a Beer Gut won the most games and lost the least, giving them an average of 2.4 points per game. Meanwhile, even though Whoops Reunited finished 5th, they won as many games as the winner QTAC… better luck next year for Mark’s team.

To finish the season we headed to The Cotswolds to see 6 teams compete at Ducklington Sports Club. With no refs and short breaks this was the most intense event of the season for the players. Over 500 minutes and 23 games played by each team, it was epic.

The teams raised £8,000 this year and an honourable mention to Va Va Voom and One Win Wanderers for raising over £2,000. 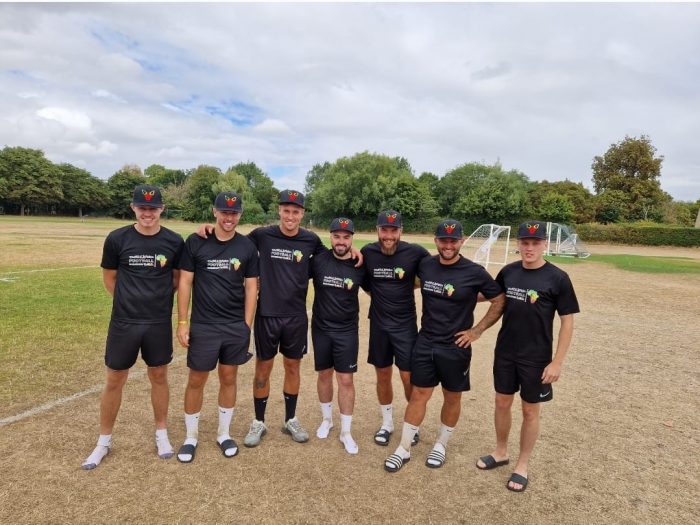 Gansters Allardyce, Winners of the Oxford Football Marathon for the second year running

It was the same final as 2021 as Gangsters Allardyce beat Va Va Voom in the final 3-1. Although Va Va Voom could feel slightly aggrieved as a Lampardesque ghost goal was disallowed at 1-0 up.

Elsewhere….One Win Wanderers had won one game all day (and it was their first). That was until the knockdowns of course, 10 hours in. They heroically beat Aston in the quarters and lost narrowly in the Semi’s to Va Va Voom. Hopefuly they come back next year as Two Win Wanderers.

We want to pay tribute to our sponsors across the five events:

Surprise Shirts played and raised money for the London Football Marathon as well as donating gifts as fundraising prizes for our teams. Surprise shirts are a brilliant family run business who provide amazingly random football shirts to you in their own unique way. Please check them out at https://surpriseshirts.co.uk/ and use code TA10 for 10% off.

We also want to say a massive thank you to PowerPlay who supported us throughout the 5 tournaments this year. Those of you who are keen to play football every week check them out. You can find your nearest league at www.powerplay.co.uk and use the joining code #AFRICA to get 10% off your first season. 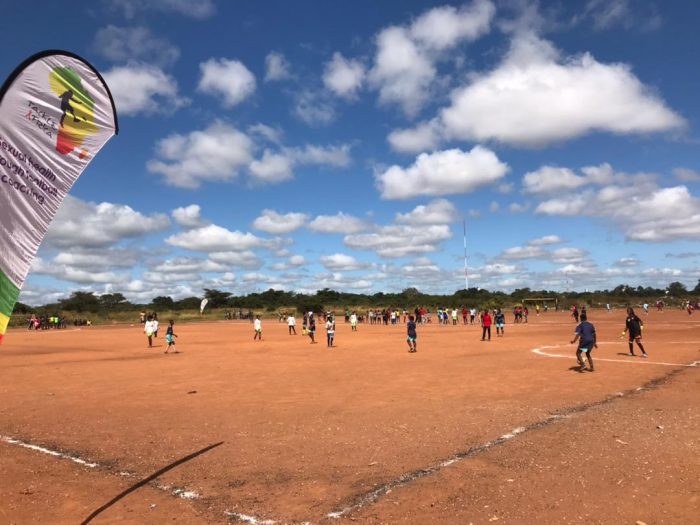 Finally we must not forget the role that 86 people in particular played this year, the most important role that anyone plays – they bring teams, they organise teams, they fundraise, they chase – for some it’s relatively easy, for others this can be hard work – we want you to know how much your work means to us – you are the most vital cog in the Football Marathon machine, therefore a special mention to the Football Marathon Captains of 2022: