This week we look at our DREAMS Innovation Challenge (DREAMS-IC) programme, funded by PEPFAR and managed by JSI. TackleAfrica has trained over forty football coaches from Kenyan partner Mathare Youth Sports Association (MYSA) to deliver specially designed, interactive football sessions that address issues around HIV prevention, Voluntary Medical Male Circumcision and Voluntary Counselling and Testing. Here, MYSA’s Beatrice Wambui speaks to us about her involvement with DREAMS-IC, and her own dreams for the future.

Beatrice, 28, has a long history with MYSA and TackleAfrica, as well as with football and sexual health. For a start, Beatrice is a talented player who has been playing with MYSA since she was nine years old. Then about five years ago Beatrice’s career path changed and she started working at MYSA, as well as becoming a more serious football coach. With TackleAfrica, Beatrice was part of the first all woman TackleAfrica MYSA programme, delivering HIV and sexual health information to players in Mathare. And that’s not all. Beatrice’s joint roles as a coach and a qualified Voluntary Counseling and Testing (VCT) counsellor and tester inspired a pilot programme that would prove the inspiration for the DREAMS-IC programme running today, combining VCT services at pitchside following TackleAfrica sessions.

The pilot showed us how readily young people accessed VCT services if provided in a place they felt comfortable, connected with a sport they love and around people they trusted. Beatrice in her current role conducts many of the testing and counseling sessions for DREAMS-IC and she spoke to us about what she’s seen as a result of the programme.

“With the pitchside testing the players have been great, and to reach them where they are is the biggest achievement we have made. Often players can’t afford to come here [MYSA], and they’re young – they’re busy playing football! But they have those myths and misconceptions about HIV and they’re indulging in so many things that they really need testing. I think going to them is the best idea.”

On top of the cost of reaching a test centre, and the unpredictable lives of young people who would really rather play football, another hurdle for programme implementers is mobilising young people to test. But Beatrice said with this programme, that hasn’t been an issue. She explains, “The turn out is so big. The players have time to contemplate testing during training sessions where their other peers motivate them. Peer encouragement works very well. Normally we need to take mobilisers when we test in the community to speak to the young people and tell them the importance of testing. But with pitchside testing, we don’t need mobilisers. Players encourage one another, they talk to each other. Being in a football team means they mobilise each other.”

Beatrice told us more about how important the counseling service is they provide at pitchside, not just the tests themselves. Beatrice never tests alone. She must always have a colleague counsellor with her in the case of a positive result, and to have additional support for the players. “If someone had an issue, and maybe he didn’t want to test but he didn’t want to share why, a counsellor comes at that time and can talk to them. The young person is then able to be informed, and maybe avoid some of those misconceptions. He’ll then go and encourage other peers, and say, ‘I didn’t know this before but now I know.’ When you have that counselling you feel you can talk.”

During our interview Beatrice spoke a lot about the importance of breaking the myths and misconceptions and how football coaches have a big role in that. We asked Beatrice about the new coaches she’s seen come through the DREAMS-IC programme so far, and how she thinks they’re handling the responsibility of that role.

“Yes, I’ve spoken to them. Some of them we have even played football together. They are really trying, and with some newer coaches the confidence is still being built. I try to encourage them, and say just be composed, be yourself. Staff are there to support you. I’ve been encouraging them and telling them: do what you know, give the information you know. If you’re not sure, or you’re not informed, for example if you’re debriefing and you’re not sure, don’t give players wrong information. Go and research. There are myths and misconceptions and if you give the wrong information, well players think you know everything as a coach. It’s easy to say the wrong thing when you don’t know. But be yourself, go and do some research and then come back informed. That’s what players need.”

Lastly, we asked Beatrice for her thoughts on the future of the programme. Being such an experienced player, coach and counsellor and tester, we were keen to know if she had ideas to grow the programme.

“I was thinking, and my idea as I’ve been seeing the whole thing, was when we go for pitchside testing, we can include the people in the community who are watching, not just the DREAMS-IC players. People come to watch football and we can include them. We should include them.  We should aim to achieve the 90-90-90 targets – 90% of people who are positive have to be tested and know their status, they have to be put on treatment and in care, and they have to have their viral load suppressed. My goal is to get everyone tested – everyone! And that includes community members who might not be players. The fields where we play are in the community and we have to identify anyone living positively who doesn’t know their status.

Thank you for bringing this pitchside testing. It has created an opportunity, it has informed people. People are aware of their status. When you get a tester come to your football pitch, it changes something. It removes the fear. Players get that confidence to test. And maybe the next time they will go to the VCT centre. They’ll think, yes now I can go. I was fearing that place, but now I’m informed. I can go.” 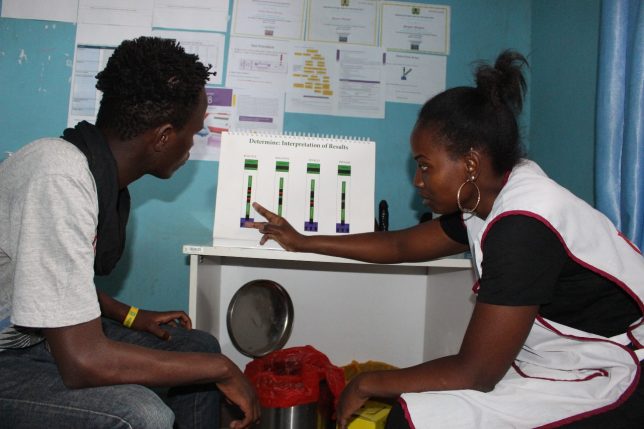 To learn more about our partner in Kenya, MYSA, and the great work they have been doing in Mathare, Nairobi, Kenya for thirty years, visit their website www.mysakenya.org

To find out more about our work and how you can get involved, visit www.tackleafrica.org/get-involved

To find out more about the DREAMS Innovation Challenge managed by JSI and funded by PEPFAR, visit http://www.dreamspartnership.org/innovation-challenge/