Two football marathons down and one to go! For those not familiar, the TackleAfrica football marathon is the stuff of legend. 8 player teams playing twelve hours of virtually non-stop 6-a-side football, all raising funds for our work in Africa.

Our flagship football marathon for 2019 took place on Saturday 22nd June at Wormwood Scrubs, London with a huge turnout of 416 players across 52 teams, all arriving fresh faced at 8am and leaving slightly worse for wear at 8pm. Overall teams raised £107,000 for our work in ten African countries, ensuring that thousands of young Africans will receive HIV and Sexual and Reproductive Health and Rights information and services through football in the coming year.

In a football marathon, the top fundraising teams are treated to a range of prizes, from flair gazebos kitted out with an ice pool to keep your drinks cold to a much needed extra man for a couple of hours. A big shout out to Premier League legend Clinton Morrison who came this year as the coveted extra man prize! Clinton played six games with our top fundraising team Va Va Voom, providing welcome relief in the afternoon for some tired legs. 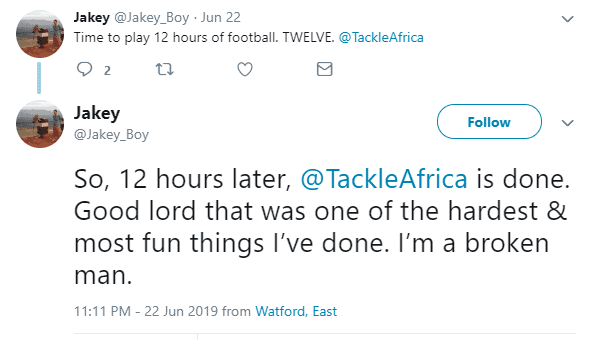 Some essential figures for all you statos from London:

Thanks to everyone who made it such a brilliant day: players, supporters, volunteers, referees, litter pickers and the good old British weather. Video highlights to follow so watch this space!

If you’d like to make a donation to our work you can easily do so via our website https://tackleafrica.org/get-involved/donate/ 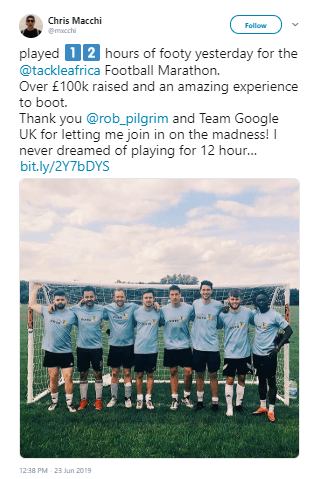 ⏰ Tomorrow is #SaferSportDay, and there's one final step in making sport safe for children: Monitor & evaluate your efforts - be your own referee and make sure what you're doing still works #SafeInSport #ItStartsWithYou #BeAChampionForChildren @coach4africa @SafeinSports pic.twitter.com/KqEK…

The Brighton Football Marathon will now be taking place on Saturday the 29th of August, as opposed to being spread out across the whole Bank Holiday weekend. See you there! 🔆🌊 pic.twitter.com/REt2…

🦍Finding a Ugandan gorilla family can require over 3 hours of walking, or about 20,000 steps. Naome hit 20,000 steps in one day. Beat that! Post the most steps you've done in a day below Find more of our #12Challenges with the interactive race map: racetoafrica.run pic.twitter.com/rWrM…