TackleAfrica have been confirmed as a member of the Catalyst 2030 movement! The timing couldn’t be better with the Annual General Meeting taking place in early July, TackleAfrica have joined forces with hundreds of organisations and individuals motivated to collaborate in order to achieve the Sustainable Development Goals. 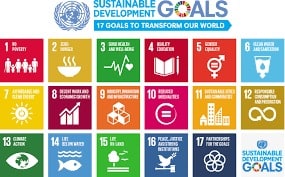 TackleAfrica’s long standing commitment to collaboration and adding value to local partner organisations in Sexual Health through Football, as well as our core value of delivering excellence, fit neatly with the aims of the Catalyst 2030 movement and as the website states:

“Severe inequalities in income, health, education, and representation disadvantage billions around the world. Meanwhile, humanity’s growing ecological footprint is threatening many of the natural systems we all depend on – such as climate, oceans, land, biodiversity, and fresh water – which are nearing irreversible tipping points. These crises often intersect, creating conditions ripe for instability and conflict.

We may be the last generation alive that can act to reverse these trends. Catalyst 2030 believes that collective action and bold, new strategies are needed to address the crises of our time. Joining forces with communities, governments, businesses, and others, Catalyst 2030 members are working toward changing systems at all levels. Cumulatively, members have already impacted the lives of millions, often with limited resources. Together, we envision the realisation of the SDGs for all.”

More information on Catalyst 2030 can be found on their website.

Keep an eye out next week for more on UN Deputy Secretary General Amina J Mohammed’s Fireside Chat to launch the Getting from Crisis to Systems Change Report.

Amazon Prime Day is almost here! Shop the deals 21st – 22nd June and donate to TackleAfrica at no extra cost Prime members can do more than discover great deals: Simply shop at smile.amazon.co.uk/c… or with AmazonSmile ON in the Amazon Shopping app, and donations will DOUBLE pic.twitter.com/HjTi…

The theme of this year's International Workshop on HIV & Adolescence is: Adolescents Living Our Best Lives: HIV and Beyond Join @Academic_MedEdu to hear from experts to learn about tried and tested initiatives and strategies that support adolescents to live their best lives! pic.twitter.com/UK5w…

While we're in the UK for the Football Marathons, we are also excited about the second most anticipated tournament of the summer 🏆 Follow this link and use the code 40K8NFI602 to join our Fantasy Euro League ⚽️ gaming.uefa.com/en/u…