The commitment to gender equality is a fundamental principle here at TackleAfrica. We see the power that simultaneously engaging adolescent boys and girls can bring across our programmes around education and conversations about sexual and reproductive health. This is why we are immensely proud to be able to say that half of the young people reached by our programmes are female! 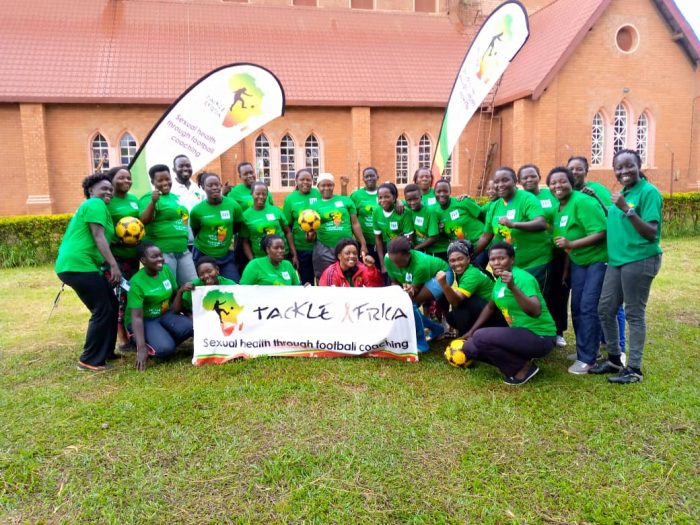 But the importance of gender equality does not end with the players, and in Hoima, Uganda we recently saw 25 new female coaches complete their TackleAfrica coaching training.  Chrispus Muganyizi, the TackleAfrica Project Coordinator for the area, is clear about the advantages having female coaches as well as mixed gender players can bring to a programme, to both the male and female participants:

“Over the past two years, it worked well in opening up conversations around gender equity and giving adolescent girls and young women (AGYM) the opportunity to participate in a normally male-dominated sport.

By recruiting female coaches, Adolescent Boys and Young Men (ABYM) can see positive female role models in positions of respect. And by having mixed teams, where adolescent girls outnumber the adolescent boys, the young women are given a space to express themselves and the young men learn to share a safe space.

Both sexes are also pushed into working together to achieve a common goal. Adolescent boys and young men also struggle even more than their female counterparts to overcome fears of accessing sexual health services, and so frank and open discussion with mixed groups gives them a chance to confront their own internal barriers and look for solutions together. Seeing AGYW in their own football teams more willing to access services normalises health-seeking behaviour and has a positive effect on ABYM.” 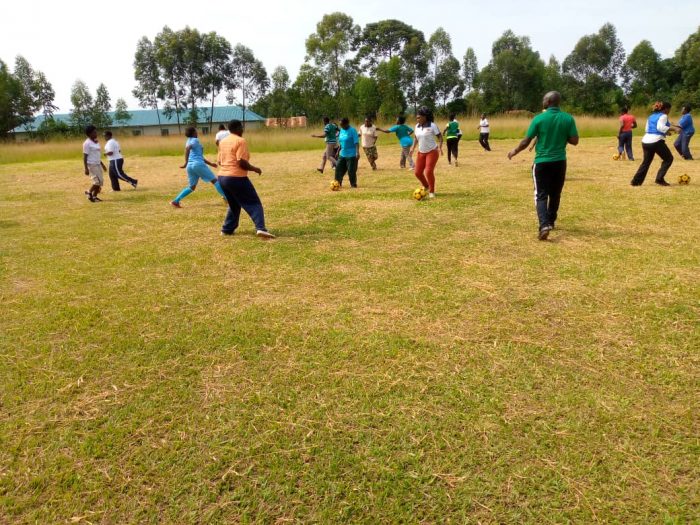 The coaches getting used to the new training drills they will be using with their players!

Like many TackleAfrica programmes, the project in Hoima has a clear set of goals related to sexual and reproductive health education. The main three are to reduce unintended or early pregnancy by creating awareness of and demand for contraception, to increase safer sexual behaviours amongst young people, primarily though increasing the use of condoms or other forms of contraception, and to reduce the fear and stigma surrounding HIV testing to increase the uptake of testing services. As laid out by Chrispus, achieving these goals becomes difficult if patriarchal or divided gender dynamics are left unchallenged.

The programme was initially designed to be run in schools, but due to Covid and the continuous closure of the schools, the decision was made to start the work in the communities first, with the coaches mobilising the community teams which will then be dissolved once the schools are open and work there can begin. Despite these challenges, and even though this current programme is still in its early stages, over 400 adolescent girls and boys have already been reached just through session one alone!

Things you love to see! Football is for everyone 👏👏👏 twitter.com/Football…

The Africa Cup of Nations kicks off today in Cameroon! 🇨🇲⚽️ Who will you be supporting? #AFCON2021

What are your New Years resolutions? 🤔 Whether its January 1st, New Years Eve or any of the days in between, here at TackleAfrica we're always committed to helping young people develop and maintain healthy bodies💪and healthy minds🧠... all year, every year! pic.twitter.com/8bBE…

We use cookies to ensure that we give you the best experience on our website. If you continue to use this site we will assume that you are happy with it.OKPrivacy policy